The current impassioned debate about the need to remove monuments to the Confederacy and its leadership has rekindled my long personal struggle with the subject. When I was young, we lived in Montgomery, Alabama, which in the early 1960s was at the very forefront of an outdated and oppressive culture of racism. We subsequently moved to Northern Virginia, rather more up-to-date than Alabama, perhaps, yet fiercely proud of its Confederate past. And I have lived in or near Dallas, Texas for nearly twenty-seven years. In my early years, therefore, I regularly passed by Confederate memorials such as the Robert E. Lee house in Alexandria, and a statue honoring Confederate soldiers nearby. Even today, I often attend events and gatherings at Dallas’ Lee Park, honoring General Robert E. Lee. I have had friends who taught at Dallas’ Jefferson Davis Elementary School. Such familiarity has fostered in me an acceptance of such things, despite knowing that it must be difficult for a black student to attend a school honoring the president of the Confederacy. I felt that undoing such legacies from the past might hide an important part of our common history. But I have been reconsidering.

I do honestly think these monuments and memorials helped me develop an appreciation for the nearness of the past, and instilled in me a sense of history. And for quite a while, the idea of taking them down was unappealing to me. So I have wrestled with this question mightily. One the one hand, I do think that the very existence of Confederate monuments represents something utterly unique in our history – how many losing rebellions throughout history were ever permitted to honor their failed “heroes?” The fact that these monuments were permitted possibly speaks volumes about American tolerance.

On the other hand, the Confederacy was ultimately about preserving and promoting a system of exploitation and human misery that ensured that an entire race was oppressed, disenfranchised, and denied the right to be full Americans. Slavery – The United States of America’s “original sin” – bore a legacy that still tears at this nation today. Honoring that legacy is incomprehensible.

Too, it is important to note that many of these Confederate monuments did not arise in the near aftermath of the failed rebellion; they typically date from the early 20th Century, long after the Civil War. Dallas’ Oak Lawn Park was rechristened Lee Park upon the dedication of a statue in 1935, 70 years after the Civil War, at a time when Americans were embracing a romantic, idealized, and fictitious image of The Old South. They were inspired by a misguided nostalgia for the “noble” South that never really was. And, quite importantly, as these monuments usually date from the time when the Ku Klux Klan was at its apogee, it is probable – almost inevitable – that they genuinely do represent a racist reminder that despite the defeat of the Confederacy, its heirs intended to maintain the status quo of oppression and exclusion of Blacks from mainstream America.

Battlefield parks, historic forts, preserved sites of significance (such as plantations that include slaves’ quarters and aspects of their lives) are appropriate ways to keep history present and tangible. Memorials to the fallen of both armies at battlefield sites such as Gettysburg remain appropriate and fitting, much as if in a cemetery. But civic statues and monuments are neither necessary nor educational even when they claim to represent “history.” For one, Confederate soldiers were in rebellion to the lawful government of the United States of America. For all that ‘rebellions are lawful when they succeed,’ this one failed, and honoring its proponents is simply improper. For another point, remember that the majority of these memorials date to a full two generations after the Civil War, and do indeed reflect a reprehensible reminder that, despite the Confederacy’s defeat, its aim of racial oppression was in full force.

It is time to move beyond they early 20th Century mythos of The South and embrace an America that truly is more free and equal, but which has much work remaining toward genuinely achieving those goals. Undoing reminders and symbols of an oppressive past is not erasing history; it will be embracing our 21st Century America. 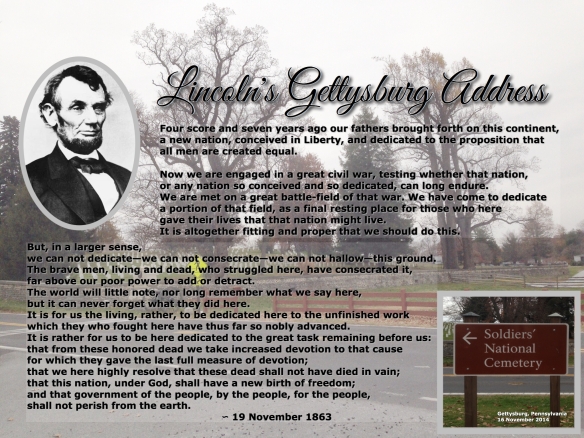